Soon I hope to sit down and write a nice long post about the past year and catch the blog up.  Add in everyone's birthday picture and introduce Baby Seth!  But for today I'm content to just get my feet wet again and write something.

We homeschool year round and our year officially started all the way back in May, but September was an excellent time to evaluate our plans and I did make some changes.  One change is that I added a course for myself!  Southern Literature.  I'm planning just two books a month and hopefully at least a short narration about each in my new notebook.  I just love a new notebook.

I started with Cold Sassy Tree, which I'd read before.  It was a perfect opener - easy to read, but touching and sweet and very Southern.  I would highly recommend.

I already have a potential book list started, but the Georgia Literary Festival is coming up soon and I may wait to make a final list until after that.  Until then I think I'll read the books already on my shelves - some are new, some are old favorites.
That should hold me for a little bit.

this has been a stressful and emotional few weeks.  I may come back and delete this post later because I really don't like to be negative here.  However, using my words really helps!

I'm very thankful that Casey has had a lot of overtime for the last few months.  So many people are without jobs right now, that I don't dare complain about having too much work.  That being said, overtime is hard on everyone, especially when it lasts for months at a time.  We've been managing just fine, but there's this constant state of high-alert that wears on you.

And then Barbara passed away so unexpectedly.  I was surprised at how deeply saddened I was by the loss of someone I had never even had the pleasure of meeting in person.  As I looked back over the years we had known each other (almost 8), I realized that the conversations we had over email had a huge impact on me and we had talked over many topics that I wasn't even comfortable talking to close friends about.  Barbara went deep, quick and I think that made it very easy to feel close to her.  She is very missed.

This pregnancy has been so sweet and so shockingly easy.  It's been such a blessing, as a matter of fact, that I can't believe I'm adding it to this list.  My blood pressure has been creeping up, though, which is worrisome.  And at my last two appointments the doctor has had a hard time finding the babies heart rate.  The baby is fine, with a nice, strong heart beat, but is apparently hiding in a "corner" of his or her little home.  Lying there, waiting, is enough to reduce me to tears.  I was scheduled for a sonogram on Friday, but the sonographer was out sick.  I was so disappointed!  Casey had taken a day off so he could be there and everything!  We did get to go out to lunch, though, thanks to a very, very sweet friend who kept all of the kids (as well as putting dishes away and washing my laundry - she is awesome!).

And we decided to have a yardsale.  For cryin' out loud.

On yardsale day, Casey massively hurt his back.  He was completely out of commission for days and in pain all week.  It's hard to see one's big strong husband in pain.

And, of course, there was the election.  Probably the less said about that, the better.

And then, just when I thought I was going to be able to go with my mom and sister on a little (very much needed!) over-night getaway - to the beach no less! - I somehow managed to seriously mess up my knee.  One second, I'm fine.  Next second, screaming in pain.  I do seem to be recuperating quickly and, hopefully, I'll still get to spend lots of time with my mom and baby sister this week.  But words fail to describe how much I was looking forward to this trip.

I feel like there's some purpose, some lesson I should be learning.  Contentment? Grace under pressure?  In the meantime, I just keep putting one foot in front of the other.  Or, I will.  As soon as my knee heals up.

Today I'm mourning the loss of a good friend and mommy mentor, Barbara Curtis.  She was an author, a blogger and a mommy of 12.  She was a tireless encourager, advisor and example.  Lots of us are willing to share the good things that happen, but Barbara shared the good and the bad in the hopes that her transparency would help others.  Being a mother to a big family is not an easy calling, and she didn't sugar-coat it, but she never failed to encourage.  This is one of my very favorite quotes from her book The Mommy Manual...
"Even in my worst moments, I can get a grip if I remember how good it's gonna feel when I stand before him, with the day-to-day tears and triumphs of motherhood far behind me, and hear him say, "Well done, good and faithful mommy."

Posted by Shannon at 9:31 AM No comments:

I need to get caught up on birthday pictures!  Brenna turned eight all the way back during the summer.  She is such a sweetheart, but she's growing up entirely too fast for me! 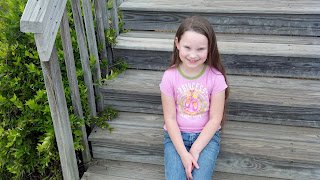 Labels: pictures on the steps, raising a young lady

I never really intended to take such a long break.  This blog has been my scrapbook and journal for years and I kind of hate that I've missed so many months.  But, life has been busy and time for extras has been in short supply.  As I scanned back over entries from years ago, though, I realized that the time I spend jotting stuff down is well worth it.  So I'm going to attempt to catch up a bit over the next few days and then stay caught up.
First, of course, the biggest news....﻿ 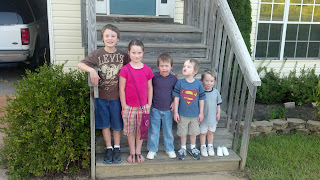 "Mom, did you just say what we think you said?"
Yes!  A new little brother or sister! 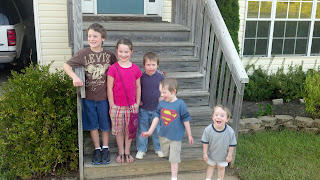 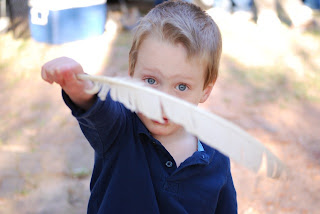 My good friend Lesley took this picture of Christian. I just love it.
I am not good with resolutions. Big, sweeping changes just don't happen all of a sudden because it's January. And yet this is a good time of year to look forward and set goals. It helps me to post them on here so I can find them in a few months!
My original Things I Want To Do list was incredibly long, so I decided to divide them up by what role they fall under (wife, mama, etc) and limit myself to just a few per role.
To do for my self...

To do as a homeschooler.... 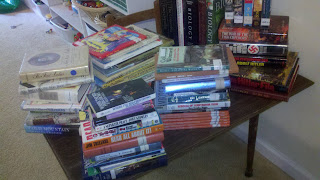 I meant to post about our incredible library book sale months ago. We got all of this, about 60 items including books and movies, for around $20. You buy a box or bag for a set amount and cram as much in as you can. And I was happy to know that the money was going to the library, which we use constantly. With a good library system I really believe I could homeschool the kids for nearly free if it was necessary.
Some of these books are ones that will be passed along after we use them and some are ones that I've been interested in for ages.
Now the challenge is to start getting our own library organized!
Posted by Shannon at 8:15 AM No comments: 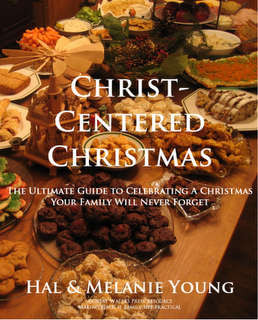 I got another early Christmas present! Hal and Melanie Young sent me a copy of their newest ebook to review, Christ-Centered Christmas. I was afraid I might be a little biased because I love Hal and Melanie - their book Raising Real Men is one of my very favorites - but this book really is just great.
What I appreciate about the Youngs is that they tell you the why and the how. They tell you the history of different traditions and how they've implemented them in their own family. That makes it very easy to adapt the tradition to your family without losing the meaning.
They also make an excellent point about our celebrations being a means to "draw the people around us towards Him." In all the hustle and bustle of cooking and cleaning it's easing to forget the purpose. When I focus on the why of what I'm doing, the how is a pleasure instead of a burden.
Another thing I love about the book is the beautiful artwork they've chosen. The kids and I are using it as an imprompto art unit. Combined with all the hymns they've included (with links to the music), it really is nice unit study for school.
And they deal really nicely with the whole Santa thing and just with gift-giving in general. My favorite quote - "So, don't let gifts rule your season, let your gifts reflect your heart and soul!"
The whole book is excellent and they're offering it for $6 right now. Thanks so much, Hal and Melanie for sharing it with me!
Posted by Shannon at 7:52 PM No comments:

I was so excited to take part in Monica and Carrie's Sister Shoebox Swap this year! It's always so much fun to choose little things you think your "sister" might like and then to get your own goodie box in the mail! Moms like surprises sometimes, too!
The theme this time was Merry and I was feeling very merry when I opened up this box full of gifts from Kendra! I was tickled to have her for a sister because I've been reading her blog forever. 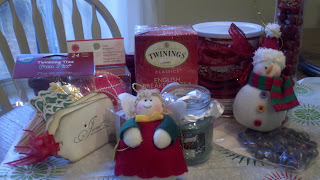 Kendra had wrapped up lots of things so it felt like Christmas morning! She sent beautiful burgandy yarn so I can work on my very amateur knitting skills. I've already started in on the breakfast tea (which I love!) but I'm saving some for Christmas morning to go with the red velvet pancake mix! Oh yum! Red velvet is my very favorite cake - I'm pretty sure it will be my favorite pancakes, too! Precious cupcake liners and picks saved the day for me last weekend when I threw together a children's Christmas party at church. So cute! Adorable ornaments and a pine candle (I love this scent! I'd never tried it before) have it looking and smelling Christmasy around here. And look at those pretty gift tags...they have little jewels! There were yummy little candies (spicy!) to snack on and a pretty little apple candle and a very special necklace (that's it right down front).
Kendra, thank you so much for putting this together for me. It came on a very hard day when I was just wrung out. Knowing I had a present to open when everyone finally went to bed made all the difference in the world!
Posted by Shannon at 7:32 AM 5 comments: 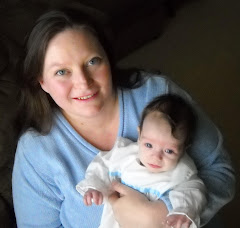